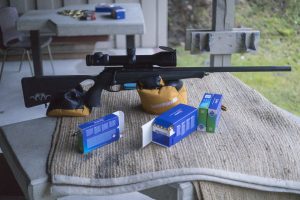 When an average hunter talks about the accuracy of a rifle, one often means the 5 shot group at 100 meters. The old wisdom advices to measure rifle with certain metrics. Often there is also mentioned the 1 MOA accuracy. Well, basically it is a good rule of thumb. If a rifle shoots 5 shots in 1 MOA group it is accurate enough for normal hunting.

When a 300 meters ISSF competition shooter talks about accuracy he refers to totally different metrics. These guys and girls need to stick 60 bullets inside 100 mm circle, preferrably over 50 % of them actually inside 50 mm “inner circle”. That is what is needed for winning ISSF competitions. And that performance is required constantly.

When a Finnish hunter is hunting an black grouse at 300 meters requirements are pretty much the same as with match rifles. The most effective spot is about 0,75 MOA at that distance. If one wants to save all the meat for dinner, the shot to the head or neck is the only possibility. Then we’re talking about 0,5 MOA spot. That is a pretty small target and you have only the first shot. Rarely you get an opportunity to shoot second shot.

This is also the reason why calibers used in rifle matches are popular here. At least many of the hunter’s dream about these formula one’s of hunting rifles. The another challenge is that we’re pretty skimpy. Hunting is basically everyman’s sports here, and typically a hunter hunts everything with same rifle. From a black grouse to moose. With both light full metal jacket and with heavier expanding bullet. This is the reason why versatile but still accurate calibers like 6.5×55 are so popular in Scandinavia.

Finnish hunting culture is also where Finnish ammunition manufacturer Lapua has it’s roots. They have also gained lot of experience and success in competition shooting. When you combined both of these, it is quite natural that Lapua is typically aiming for top performance keeping still versatility in mind.

That is also the foundation where Lapua based their first own match caliber. For years the 6 mm BR had been The One and Only in rifle matches, 6 mm PPC in benchrest shooting. Norma brought 6XC with a help of NRA High Power champion David Tubb. During their excistence these cardridges have naturally gained a lot of interest also in hunting community. It is natural because these cardridges provide lot of potential accuracy.

Pure competition cartrdiges has anyway some challenges in hunting use. That’s why Lapua wanted to gain something more. They wanted to bring something new and different to the markets. They contacted Swiss match rifle manufacturer Grunig & Elmiger and started their design process.

When one starts to design new rifle cartridge there should definitely be something special to offer. Otherwise newcomers will soon disappear under the mass of existing ones. This time Lapua wanted to find something which will solve certain issues with 6 mm cartridges. High barrel wear and sensitivity to barrel twist for example. Those are topics which typically are only everyday life for a competition shooter but might be showstoppers for hunters. Especially in case you want to hunt different type of game with same rifle.

To provide enough versatility in bullet weight Lapua wanted to selet 6.5 mm as bullet diameter to their new cartridge. That offers wider window for different barrel twists so it is easier to use different type of bullets. 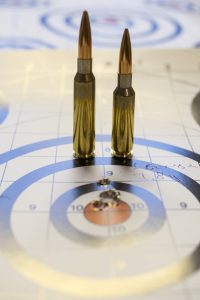 As a result Lapua had a cartridge with very modern case design in their hands. Short case with same base diameters than .308 Win, modern pressure level, 30 degree shoulders etc. Competitions shooters adopted the 6.5×47 Lapua for their use soon. During last 10 years 6.5×47 has been adopted also to F-Class matches, which are already closer to what tactical long range shooter does.

Last piece of the puzzle was found also thanks to Finns. If you think about the success of any cartridge the transition from match rifle to hunting use is the key. Many old match calibers were used for hunting also but only thanks to custom build rifles. That has been the last barrier in the road to victory for many great target calibers. You need to get a production rifle out if you want to achieve more.

Well, I don’t know whether it was purely luck or well made plan but when the Finnish Blaser importer changed to Lapua’s distribution company NorDis Oy, the story was completed.

Many of us have seen the results of this dream marriage this year. A German luxus rifle manufacturer has washed it’s face and expanded their repertuire to factory made long range hunting rifles. The Blaser R8 Long Range series is based mostly to two Lapua calibers, 6.5×47 Lapua and the mightly .338 Lapua Magnum. Already this tells you what has been the effect of Finns. 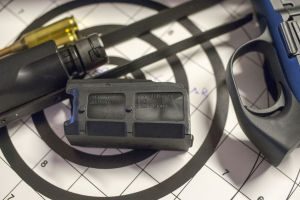 Basically it was a pretty simple for Blaser to add 6.5×47 to their caliber list. They had already .308 Win magzine insert, also the bold head. They had also 6.5 mm barrels with 1:8,5” twist. Only change needed was the chamber.

I am very thankful that Blaser decided to make also another modification to their current specifications. They selected as 650 mm as their new barrel length for Long Range series match barrels, instead of typical 600 mm. This is the same length they have had in magnum calibers, but now also 6.5s47 Lapua is provided with 650 barrel.

That is actually one of the biggest benefits in Blaser R8 6.5×47 Lapua. This small fact makes is easy to shoot the bull’s eye with first shot. Because Lapua is using exactly the same barrels as their test barrels in 6.5×47 Lapua, the load data for factory load matches with the actual rifle performance. You can trust the velocity data more than typically. It removes one variable from long range hunters list of challenges.

I was able to confirm this when I was able to visit at 500 meters range. Steel targets were waiting for me and a big pack of different ammunition. I had shot the Blaser earlier with 6,5 grams and 8 grams Lapua Scenar factory ammunition, and the ZEISS Victory V8 2.8-20×56 was adjusted for 8 g Scenar at 100 meters. The ASV+ LR scale ring (This time number 4) was selected with ZEISS ballistic calculator. I had anyway a set of brand new ammunition with me, meaning 7,8 g and 8,8 g Scenar-L and the biggest novelty, Lapua Naturalis hunting ammunition, loaded with 9,1 g expanding copper bullets. I was basically first one able to test this ammunition at the shooting range.

Based on discussions with Lapua factory people the 7,8 g Scenar-L was loaded with the biggest expectations in advance. That was loaded close to the optimal, meaning the velocity where the best accuracy of 6.5×47 Lapua is typically found. That is close to 850 m/s V0, or a bit lower depending the bullet. So, no reason to seek the flattest trajectory with 900+ m/s velocities if you want to maintain the accuracy.

The first (Positive) shock was that basically all the loads were at same point in 100 meters. Both 7,8 g and 8,8 g Scenar-L were shooting at same point than 8 g Scenar. Hmm…Interesting. 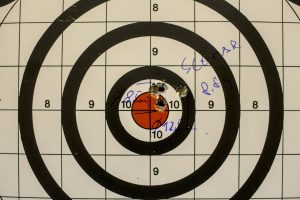 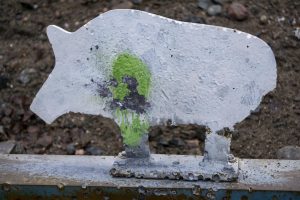 The second wow came when I started to shoot 300 m boar plates. This far the ASV+ was placing the hit only two clicks low. Because the ring didn’t have the scale to 500 meters, I checked the right adjustment with Shooter application. I had set the basic data based on Lapua web page, meaning velocity and BC, and I calculated that I need 36 clicks up at 500 meters. I loaded the Blaser with 8,8 g Scenar-L and checked whether my spotter was ready. He was and I aimed the reticle to the top edge of green spot at ram’s shoulder. Press of the standard Blaser trigger sent the bullet to the 0,709 seconds flight. Binnnggg….The steel was indicating that something happened. My spotter shouted “three clicks down”. Damn. No success with the first shot but anyway. Just based on calculated and factory data, without test shooting the combination and measuring the velocity earlier 15 cm low was quite good result.

I adjusted the ASV with 3 clicks and made another shot. It hit the edge of the spot. Next four shots were all touching the borders of 15 cm paint spot.

I was satisfied for this about 1 MOA group at this distance.This example tells it all. The Blaser R8 6.5×47 Lapua is accurate hunting rifle. Yes, you need to remember that it is basically normal production rifle for hunting. The caliber makes it shoot like a match rifle, though. I have experienced earlier that Blaser 6.5×55 standard barrels are accurate. They all shoot about 17 mm group with 5 shots at 100 meters. My first group with 6.5×47 Lapua was about 9 mm. That is basically the difference. If the typical hunting rifle is a 1 MOA rifle, Blaser R8 6.5×47 Lapua has potential to be a 0,5 MOA rifle. If only shooter’s nerves are in top condition. It is possible to shoot at least 4 rounds in less than 10 mm groups repeatedly, with a factory load.

As an summary I can say that 6.5×47 Lapua is a versatile caliber for small and middle sized hoofed game at 300 meters. Lapua Naturalis has tested to perform well enough unting 380 meters but I would say that the energy level starts to be a bit low for example for white tailed deer at that distance. It anyway exceeds the performance of 6 mm match calibers, and is close to 6.5×55 Swe. For small game like Scandinavian forest birds and foxes this formula one of hunting rifles can perform also at longer distances. Anyway, as Lapua’s new slogan states: Respect the game!