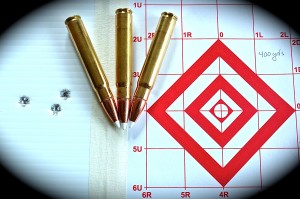 Everyone agrees the 9.3X62 is an effective, authoritative cartridge at short to moderate range. It kills cleanly, conserves venison, and can be managed and shot well.  However, when it comes to extending the range, much less is known about this wonderful caliber.

The vast majority of game in both the US and in Europe is taken at less than 200 yards/meters. Yet there are times when an effective range of 300 or every 400 yards or meters is very desirable. And the belief that the 9.3X62 is not effective at these ranges limits the acceptance of this caliber. So I began a quest to see just how effective the 9.3X62 can be at 300 and 400 yards/meters.

My preferred rifle in this caliber is an R8 Professional Success with a 20.5″ Semi-Weight Fluted barrel. I just love the balance and looks of this configuration. I also fitted it with a kickstop inserted in the buttock and a Carl Zeiss Victory HT rail mounted scope with a #60 lighted reticle and the ASV+ ballistic turret.

Experimentation with some 190 grain Aussie Custom Projectile monolithic bullets left me disappointed. These bullets can be driven to high velocity but their short for caliber profile also means that velocity is shed quickly and the expansion threshold was much higher than I hoped around 2,000 fps which meant the effective range was limited to around 250 yards.

The Nosler 250 grain Accubond, with it’s polymer tip and boat tail profile showed some promise. Nosler documents a minimum velocity threshold of 1,800 FPS to insure expansion and as it turns out, this minimum velocity can be achieved at 400 yards with my 20.5″ barrel. So my quest became, finding an accurate load and validating the ASV+ turret system.

I found a load that provided excellent accuracy and the required velocity, 58.0 grains of IMR4895, Lapua case, Fed GM215M primer and seated to the channeler of the bullet. In my rifle this load is accurate, very accurate, over the intended range of 0-400 yards. In fact I was very presently surprised when it proved as accurate at 400 yards as 100 yards. Here is a picture of a three shot 400 yard group I shot this past weekend, it measures just a little more than 1″ and is perfectly center vertically when using the #6 ring on the Zeiss ASV+ turret set for 400 yards. Notice that the bullet is 4-5″ left of the aim point which is exactly where I would expect it to be given the wind condition of a 1/3 value right to left wind of 8-10 HPH. I would have held off to the right if I
were intending to kill an animal.

Overall this is a great load, rifle and optic configuration and it is clearly capable of humanely taking any game animal from point blank to 400 yards.