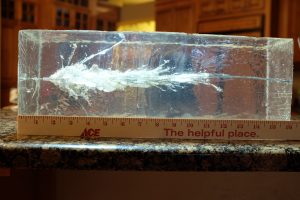 I thought I would start a dialog on the effects of long range bullets and how they go about doing their job up close or far away. There are three areas to consider for this assuming the bullet is accurate enough to place it in the vital organs of the intended game at the intended distance. Those areas are, killing the animal, immobilizing the animal, leaving a blood trail to aid in recovery if mobilization is not achieved.

To kill an animal a vital function must be removed such as ability to breath, ability to pump blood, loss of sufficient blood, or loss of nervous system. This is why the normal shot placement used by the majority of hunters is the lung heart region. Effectiveness can be improved by proper shot angle selection and precise knowledge of the animals heart and lung location as it varies from species to species. Especially so on many African species. An Impala as an example has a heart and lung location that is much further forward than a white tail deer. It is necessary to shoot a broadside Impala through the shoulder to achieve a center lung hit. A lion on the other hand has it’s heart located further back, just forward of the center, about 8 inches behind the front leg when standing broadside. However killing the animal and recovering the animal may require different shot selections for best results.

To imobilize and animal the ability to flee must be removed, such as the nervous system that controls locomotion, or the skeletal structure such as the bones that support the animal. Here again it is necessary to understand the anatomy of an animal in detail and shot selections chosen wisely to achieve the goal of mobilization. Obviously head shots that succeed in penetrating the brain or spinal column near the brain achieve immobilization. But there are other ways, one of my favorite shot placements is the high shoulder shot on a broadside animal that breaks both shoulders and clips the bottom of the spine. This shot typically drops them in their tracks. Yet another way to achieve mobilization is with sufficient velocity to totally overwhelm the animal. This can be done at close range but as the bullet travels through air it looses it’s ability to overwhelm and animal at distance.

A secondary but important consideration in the event the animal is killed but not immobilized is the ability to locate the animal so that it can be recovered. This is a complex consideration that requires consideration of bullet construction as well as shot angle selection. As an example a shot angle selection on an animal quartering to the gun may indeed penetrate the heart and lungs yet exit behind the diaphragm. It has been my experience that this shot will result in a poor or even non existent blood trail. The entry wound will be small because the bullet has not yet expanded and the exit wound while possibly large will be plugged by intestines and fail to leave a blood trail.

For all three of these considerations it is necessary to understand the role bullet construction affects the desired results. Unfortunately bullets can be designed to operate properly within a range of impact velocities. When impacting at high velocities the bullet may fragment so quickly that it lacks sufficient mass to reach the intended vital organs. When impacting at low velocities the bullet may fail to expand, which will result in very deep penetration but a very narrow wound channel. I have experienced this situation with my 30-06 using a 165 grain Nosler Partition bullet on a desert bighorn ram at around 500 yards. The entrance and exit were both bullet diameter holes and the ram did not react to the hits at all. He eventually walked over to a ledge, bedded down, and died.

For long range use it is necessary to use a bullet with a high enough ballistic coefficient to retain sufficient velocity at the intended range. This aids in shot placement because of less drop and less wind drift, but it also extends the range at which the bullet retains enough velocity to expand the bullet, what we call the minimum expansion threshold.

Many long range hunters use high BC bullets of a form factor know as VLD (very low drag). These bullets were not designed for hunting but for target use. Sierra specifically states their VLD bullets are not intended for hunting, yet many have used them successfully. Berger on the other hand responded to information coming from hunters who used them for long range big game hunting. These hunters informed Berger on two important considerations. Jump distance and jacket thickness.

Berger, in response to match shooters began to increase the thickness of their jackets to eliminate the occasional bullet that failed to arrive at the target. This phenomenon is known as the blue puff because a bullet that comes apart in the air makes a little blue cloud from the molten lead particles as the bullet spins apart. While thickening the jacket remedied this problem, it degraded the performance on big game. The solution was simple, continue to use the thin jacket bullets for hunting and the thick jacket bullets for targets. This is why the bullets are now packaged in yellow boxes for targets and fluorescent orange boxes for the thinner jacket hunting VLD bullets.

It was once believed that VLD bullets needed to be very close to the lands or even jammed into the lands to perform their best. However, many hunters who were forced to seat the VLD bullets short to fit in the magazines of their rifles. This often resulted in long jump distances. Some times 80 or 120 thousandths of an inch. Yet many hunters reported excellent accuracy whith these long jumps. Berger began to experiment and found that there were often accuracy nodes at specific jump distances of 20, 40, 60 or more thousandths of an inch. This led to a new recommended tuning procedure that you can read on the Berger web site.

While no one can argue that the Berger Hunting VLD bullets produce often dramatic kills, more often than not with the animal overwhelmed and dropping at the shot, there have also been reports of failures to penetrate the heavy shoulder muscles of some western US big game animals. I’ve not seen this with the Berger hunting VLD bullets but I did see it with early Nosler Ballistic Tip bullets. Nosler has since responded by thickening the jacket profile near the rear of the bullet and most agree that it now performs properly.

Barnes on the other hand has developed an excellent reputation among hunters as a bullet that can be relied upon to penetrate the shoulder muscles of nearly any animal. I have found this to be true as many others have. However the Barnes TSX bullet due to both it’s shape and the material it’s made of result in a low BC. The range must be restricted to achieve the desired expansion threshold. The Tipped version of the TSX extends the range some what but they fail to achieve truly long range bullet status. In response to this Barnes introduced a high(er) BC bullet design they call the LRX (long range x bullet).

My 6.5 STW is a rifle that can stress the construction of any bullet to the limits so I thought it wold be a good tool to illustrate the difference between these two long range hunting bullets, the Berger 140 grain VLD and the Barnes 127 grain LRX. So off to the range I went with 10% Ballistic Gell blocks and video camera in hand. I loaded both bullets to a muzzle velocity of 3,350 FPS and shot each into the blocks. This got me in trouble with my wife as I used her portable card table. The energy generated from these loads was so great that the expansion forces drove the table legs 3″ into the dirt and bowed the frame significantly, I hope I can straighten it.

But on to the results, here are a couple of pics pulled from the video. Can you guess which bullet is which? 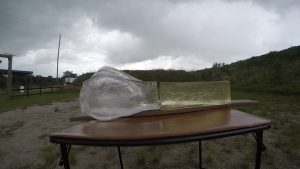 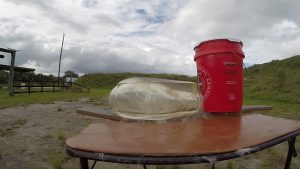 The top picture is indeed the 140 grain Berger Hunting VLD and the bottom is the 127 grain Barns LRX.

Here is a picture of the permanent cavity left by the Berger.

Notice that the bullet traveled approximately 2″ before it began to disrupt a wide area. Then around 11″ it ceased to disrupt a wide area and as evidenced by the lead streak was plowing through the gel cutting it’s own path. The recovered bullet did not shed it’s core but fragmented down to only 56.1 grains retaining 40% of it’s original weight.
Compare the photo of the expanded gel block and you will see the permanent cavity corresponds well. There was a tremendous amount of force released between 2″ and 11″. Now consider the width of the average deers rib cage and you can imagine what would be going on between 2″ and 11″. This is what turns hearts and lungs into an unidentifiable liquid.