I just had the opportunity to test a Zeiss scope with a Rapid-Z reticle so I decided to write a review. In my case the scope was a Victory HT 3-12×56 with Rapid-Z 5 reticle. They actually have different types of Rapid-Z reticles, but the concept is always the same.

The Rapid-Z 5 reticle is calculated using the highest magnification setting (12x in my case) and the ballistic conditions of a .300 win mag blaser CDP 10,7g cartridge with a bullet drop of 33cm over 300m zeroed at 100m. The rifle scope which has been sighted-in(100m) can be used for this ballistic parameters at maximum magnification over all distances within its range of application. You can not use reticle marks with lower magnifications with this cartridge. This is because of the reticle being in the 2nd focal plane. With a 1st focal plane reticle you could use the marks at all magnifications. Now you will say that you want to shoot at long range at the highest magnification. Ok but we said that you can use this reticle only with the .300win mag Blaser CDP 10,7g cartridge. What if we have a different cartridge like a 9,3×62? 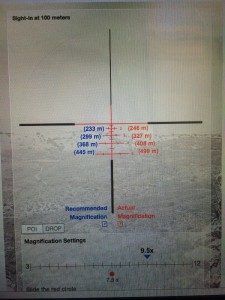 With a cartidge like 9,3×62 with a 18,5gr CDP (or any cartridge with weaker ballistics then .300 win mag) we need to lower the magnification to match reticle marks as the range to the target increase. Or we can use Zeiss ballistic calculator set the magnification:

Effects of altitude and angle shooting 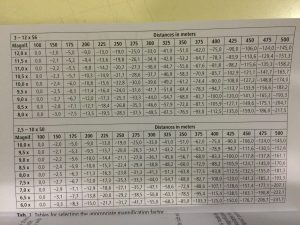 In case that you would like to use this same scope also for night hunting wild boar you have to know that all marks are illuminated not like on Reticle 60 where only a small dot is illuminated. The illumination can be really gentle but still disturbing.

Rapid-Z reticles are really complicated and can make us more problems than ASV. We have always to control the magnification and so much other variables that it is hard to compare a Rapid-Z reticle to ASV. With ASV we have also to calculate some things and choose the proper ring, but it works at all magnifications and it can be easily used as a normal hunting scope with Zeiss reticle 60… Read also the ASV Review